Community Alerts City offices are closed and operating via email and phone only. The Recreation Pavilion is open. Click here for information related to COVID-19. 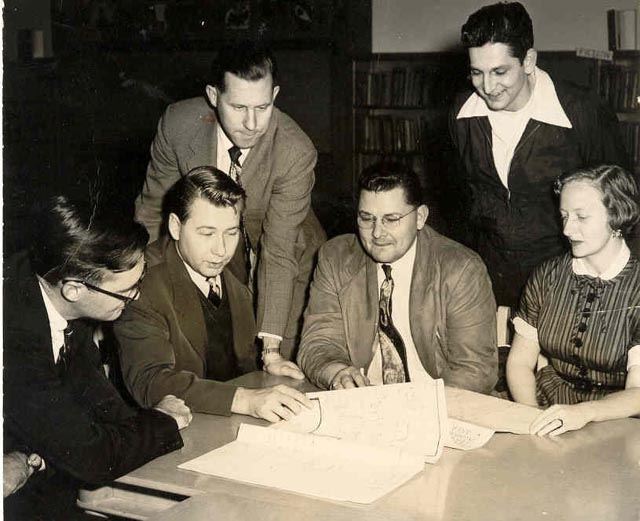 Founded in 1954, Mountlake Terrace has changed from a small rural community into a metropolitan suburb with a population of 21,980 residents. The efforts of the city's pioneers and leaders throughout the decades have created a unique city, filled with many amenities, and a vision for the future.

The residential community of Mountlake Terrace began with the speculative construction of homes for returning World War II veterans and their young families. Within ten years, the population grew to 5,000 and a group of civic-minded residents took steps to create a municipal government. The City of Mountlake Terrace was incorporated on November 29, 1954 under a Council-Manager form of government.

Four of the five original Council Members, H. Scott Wilson, Patricia Neibel, Harley McFarland and Lester Steele were present and recalled their fond memories of the City in its infancy while former Mayors Lois Anderson, Dave Gossett, and other past city officials spoke about how the city matured and the challenges they faced. Original Mayor Gil Geiser passed away in 1987. U.S. Senator Maria Cantwell addressed the crowd with stories of her Mountlake Terrace roots. Throughout the evening, past and present residents and employees reminisced about the old days. 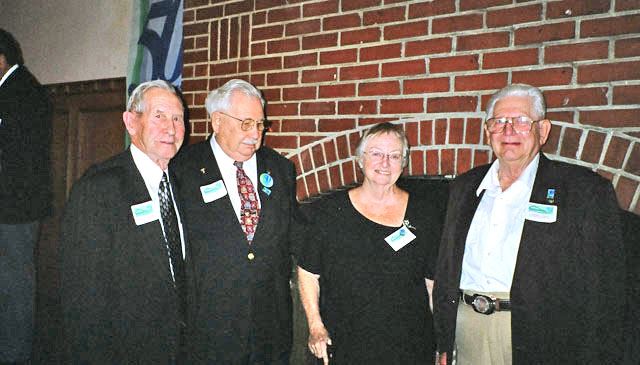 In 1961, citizens overwhelming approved a bond issue to build the city's first City Hall with a full range of services to serve its growing population. Senator Henry (Scoop) Jackson attended the dedication of the new building in 1962, and former Mayor Frank Hammer noted, "It was a big event and a proud moment for the community."

New city facilities included the development of the Ballinger Park, Evergreen Playfield Complex, Recreation Pavilion and the Public Works building now known as the Operations Facility. The opening of Alderwood Mall in neighboring Lynnwood as well as a series of arson fires in the Mountlake Terrace town center resulted in a downturn for local businesses.

A Civic Campus developed with the addition of a new public library in 1988, Police Station in 1989, and Fire Station #19 in 2006. These services were previously located in the first City Hall building when it opened in 1962.

A spurt of new construction began along the main street of 56th Avenue in 2005 anticipating opportunities to come. The businesses that survived the economic downturn of the 1980s and 1990s continue to thrive and serve as landmarks to local residents and attract loyal customers from all over the Puget Sound region.

In 2006, the City Council focused on generating economic development through the creation of a Town Center Plan. The City Council worked in tandem with the community to adopt the Town Center Plan in early 2007 with the hope of revitalizing its downtown to create an economically viable city and retain quality of life for its residents. Downtown properties were hot during the real estate boom of 2006-2008 in anticipation of the new Town Center Plan.  A recession hit in late 2008 that put many projects were on hold due to lack of financing. The first major mixed-use project, Arbor Village, finally secured funding and broke ground in January of 2012. Arbor Village opened in August of 2013 and was followed by a number of large mixed-use projects including Vineyard Park (2015) and Mountlake Senior Living (2016).

Since the Town Center Plan was adopted in 2007, new Transit Facilities have followed including Community Transit's Mountlake Terrace Transit Center (2009) and Sound Transit's Freeway Station (2011). Sound Transit's Lynnwood Link Light Rail Extension is under construction and has changed the landscape along Interstate 5 through King and South Snohomish Counties. This project will bring light rail service from Seattle to Lynnwood with a station in Mountlake Terrace in 2024.

With the promise of light rail and convenient transportation options, new projects continue to be built downtown and near the transit facilities. Atlas 236 (2021) is across the street from Arbor Village at the corner of 236th Street and 56th Avenue with over 10,000 SF of commercial space and 151 residential units.  Terrace Station is a large, three-building mixed use building with 80,000 square feet of commercial space and 600 living units adjacent to the future light rail line and close to the station. Building 1 opened in 2021 and Building 2 is currently under construction.

Van Ry Boulevard (previously known as Gateway Blvd.) is a new roadway that opened in 2021 that connects 244th Street SW with 236th Street at the Transit Center through the Gateway Place Shopping Complex.

Revitalization of the Town Center in ongoing with new businesses, public and private investments, and the redevelopment of the Civic Campus.

In 2018, the Council appointed a Town Center and Economic Vitality Task Force that made a recommendation on an updated Town Center Plan. The updated Plan was adopted in 2019.

The former Rogers Market property, located at 232nd and 56th Avenue and the Town Center's largest parcel, was sold in 2018 and demolished in 2019. The property was sold to Sound Transit for interim parking while the light rail station is under construction to replace the surface parking at the Mountlake Terrace Transit Center. The property has since changed hands and is poised for redevelopment.

In 2017, voters passed a capital bond to fund a new City Hall and Police Station addition. The project was designed in 2018 and 2019 with construction occurring throughout 2020 and 2021.  The city moved into its new home located at 23204 58th Avenue West (Civic Campus) in mid-2021.  See the Civic Campus project page for more information.  The Civic Campus Redevelopment Project includes a new City Hall of approximately 18,000 square feet, a 3,100 square foot addition to the Police Station and the Jerry Smith Town Center Plaza. 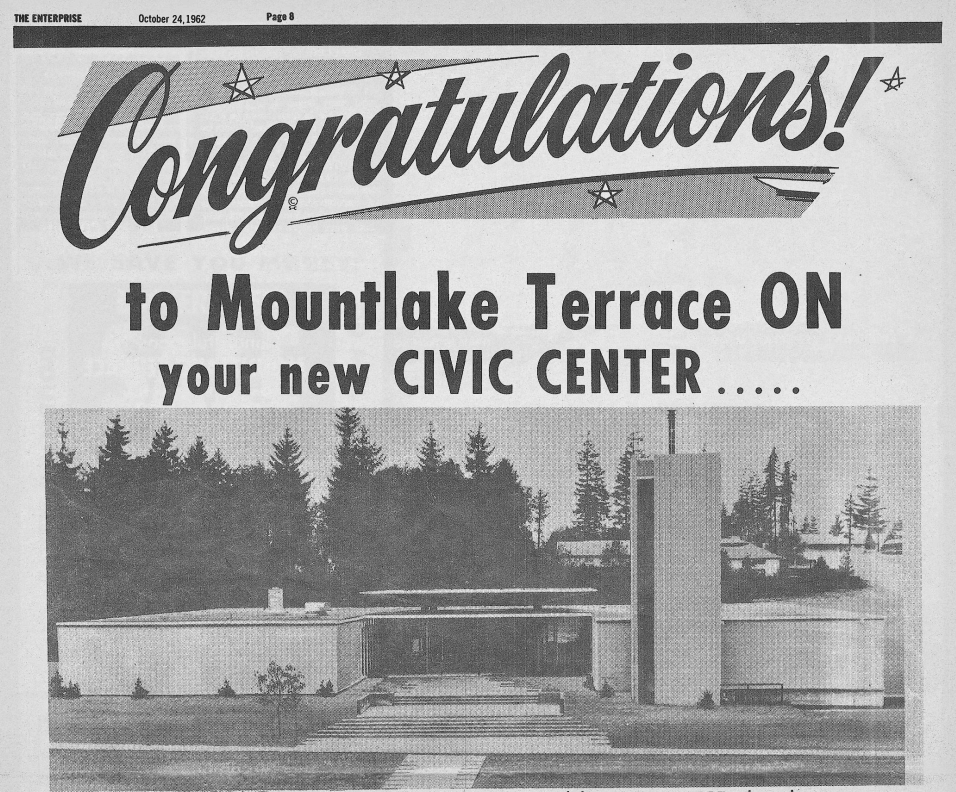 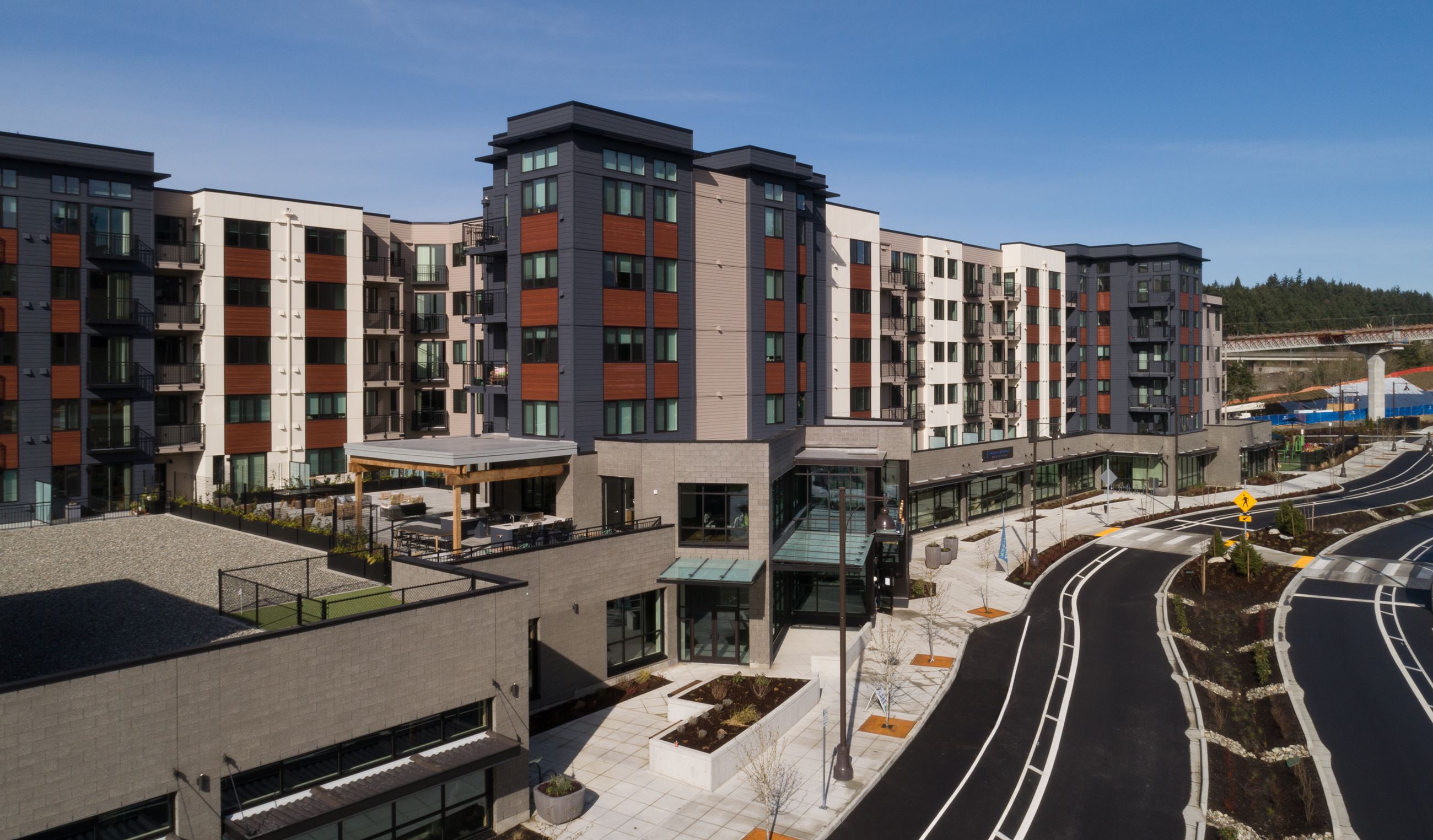 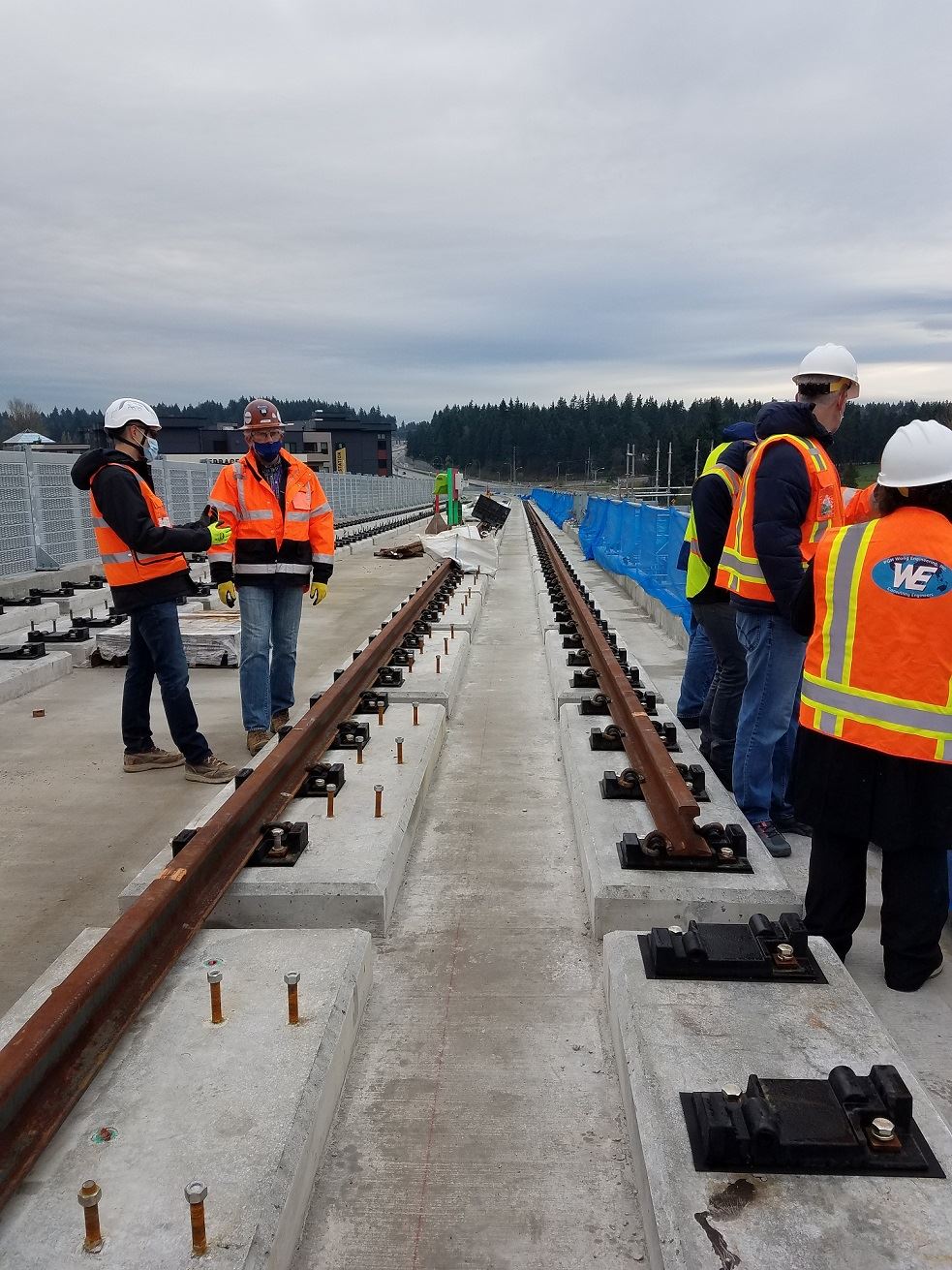 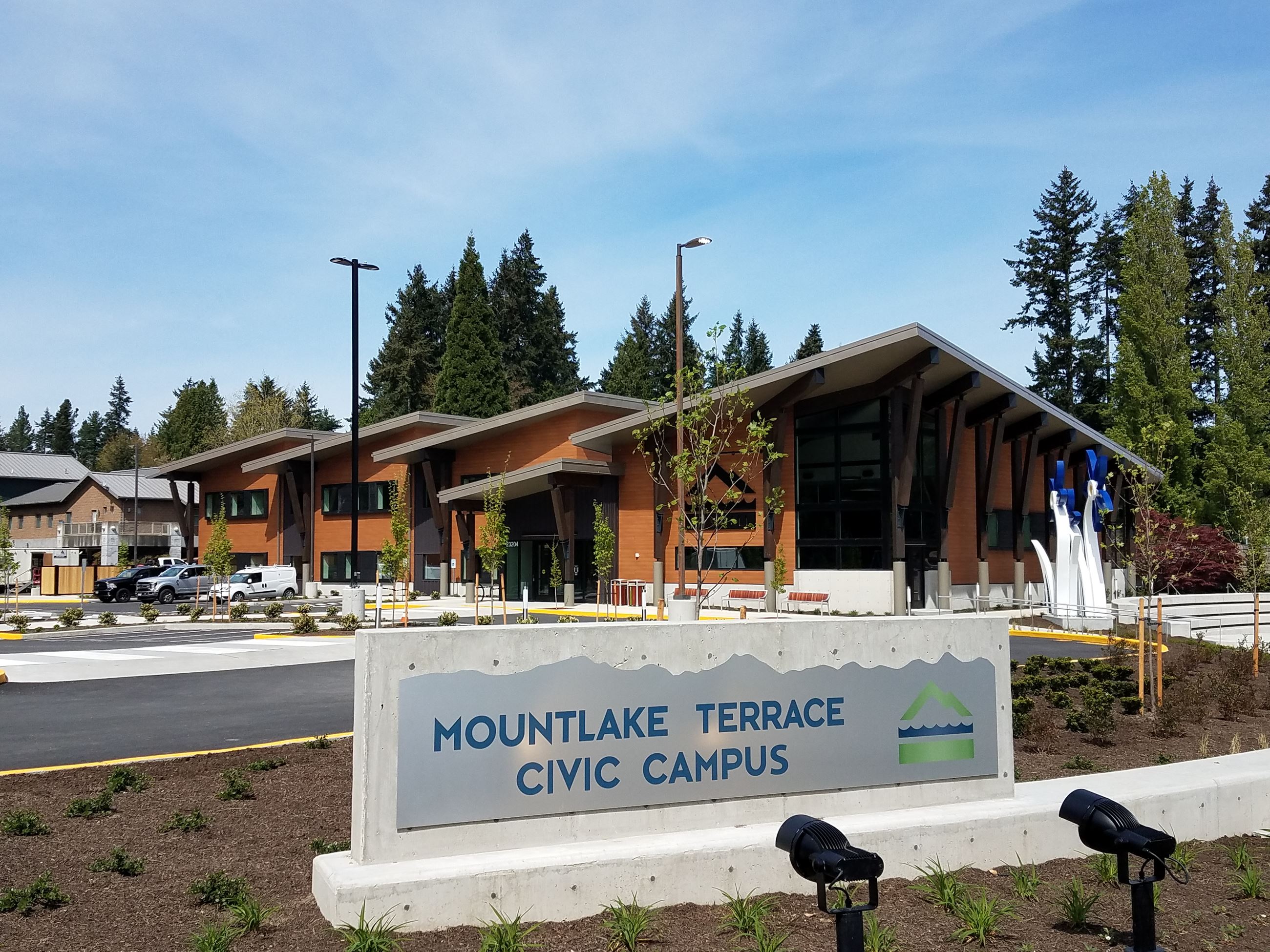